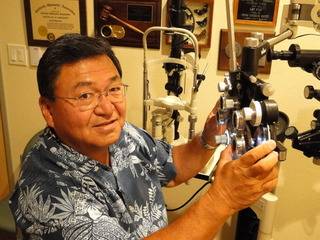 Dr. Gary Mukai has been practicing optometry in Fresno since 1974. He was originally a partner of Dr. George Miyake from 1974 to 1992. Dr. Miyake had a busy, established practice that was started in 1949. Their practice was located in downtown Fresno until 1985. The practice then moved to East Shaw Avenue just east of Fashion Faire Shopping Center. In 1990 the practice took on the identity of East Shaw Optometric Group and absorbed the practices of Dr. Gilbert Stocks, Dr. Dewey Jan, and Dr. Robert Hlywa. Dr. Jan and Dr. Hlywa continued to see patients at East Shaw Optometric Group until their retirements. In 1996, Dr. Mukai and Dr. Rick Ideta merged their two independent practices and became partners and continued to practice under the name of East Shaw Optometric Group. This means that in 2017, this optometric practice has been in continuous service for the past 68 years, the longest- operating optometric practice in Fresno.

In March, 2010, the partnership of Dr. Mukai and Dr. Ideta moved to its present location at 7215 N. First St., Suite 101, and changed the name of the practice to Aloha Family Optometric Group. The practice specializes in general optometry, contact lenses, and vision training.

Dr, Mukai has been a 20-year resident of Fowler. He has been married to wife, Karen for 42 years and has two adult sons. Clinton is married to Bethany and have 2 year old twins, Grayson and Zoe. Clinton is an architect in Fresno. Son Mason is married to Lorraine and lives in Santa Ana, CA and is a marketing specialist.

As a Doctor of Optometry, Dr. Mukai's commitment to his patients is ongoing professional education. As technology and the world around us changes, he is dedicated to keeping up-to-date with the latest innovations and equipment in the eye care field to provide the best care possible for your eyes. Over the years of practice in Fresno, Dr. Mukai has developed relationships with the best sub-specialists in the area, so that when it becomes necessary for his patient to be referred out for secondary or tertiary care, he is confident that he would be able to refer them to the best possible care in the field.

In an effort to further protect our patients and staff, we are taking the following precautions at our office:

When you arrive in the office for your appointment:

Although there may be some changes to your normal visit to our office, we assure you that we are doing our best to follow all CDC, California Department of Public Health, California Optometric Association and local public health guidelines to keep our patients, staff and community safe without compromising our standard of excellence and quality during this time.

We ask that you all are mindful of the following precautions. We are all in this together. We look forward to SEEing you all soon!