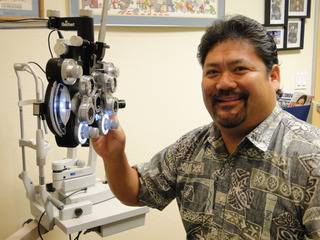 Dr. Rick Ideta specializes in General Optometry, contact lenses, children's vision, vision therapy and sports vision. He earned his Optometric Degree from Pacific University College of Optometry in 1986. After 10 years in solo private practice, Dr. Ideta formed a partnership with Dr. Gary Mukai in 1996 under the group name East Shaw Optometric Group. In March, 2010, the partnership of Dr. Ideta and Dr. Mukai moved to its present location of 7215 N. First Street under the new name of Aloha Family Optometric Group.

He has worked directly with the Community Outpatient Rehabilitation Center in Fresno along with the Kaweah Delta Rehabilitation Hospital with Stroke and Traumatic Brain Injury patients and has given numerous lectures at hospitals, rehabilitation centers in Fresno and Fresno State University on TBI's.  Dr. Ideta also specializes in Vision Therapy, where he enjoys working with children and adults with visual problems such as turned eyes and learning disabilities. Vision Therapy is a program designed to correct and enhance weak or improper vision functions. Vision therapy is not used simply to strengthen eye muscles, but rather to treat functional visual conditions in order to improve the efficiency and comfort of your visual skills.

Dr. Ideta was born in Fowler and graduated from Fresno State University with a degree in Biology.  He met his wife, Stacy, in Optometry school and is celebrating their 30th anniversary this October. She is also an optometrist here in the Valley. Dr. Ideta has two sons. Trevor is currently in his 3rd year of Residency at UCLA and pursuing a career in the field of Anesthesiology. Gaven is will start this year in graduate school at Oklahoma State University to pursue a career in Forensics.

In his spare time, Dr. Ideta is involved in his local church and is still getting out to as many San Francisco Giants baseball games as possible!

In an effort to further protect our patients and staff, we are taking the following precautions at our office:

When you arrive in the office for your appointment:

Although there may be some changes to your normal visit to our office, we assure you that we are doing our best to follow all CDC, California Department of Public Health, California Optometric Association and local public health guidelines to keep our patients, staff and community safe without compromising our standard of excellence and quality during this time.

We ask that you all are mindful of the following precautions. We are all in this together. We look forward to SEEing you all soon!